What you choose to wear and carry on the South Downs Way is largely a matter of personal choice and preference.  But here are some reflections on what clothing and equipment we found useful along the way, and the conditions that we met.

Footwear and conditions under foot

Mostly the SDW is composed of good paths.  Sometimes they are chalky or flinty and maybe eroded by rainwater.  So they can be rough underfoot.  Occasionally you walk on the old springy turf of the Downs – or along surfaced minor roads.  Even through the wettest of winters that we walked it there is generally little mud to contend with.  The exceptions were at the bottom of some hills where sediments get washed down and along the Cuckmere River from Alfriston to Littlington which from October to February was a quagmire in parts and at times actually flooded.

As you can see in the picture above of the feet that set off from Winchester, our team was variously shod.  In the warmer days of September, one lightfooted person even wore sandals while others wore trainers or stout  leather walking boots.  Nobody reported any ill effects from any of these.

We enjoyed dry weather for eight out of nine of our initial SDW walks.  On the one wet walk, though all wore waterproofs, some of those with shoes rather than boots found their waterproof trousers funneled the rain into their shoes.  The overlap of waterproof trousers over the  ankles of  waterproof boots encourages the shedding of the rain. Though not everyone finds ankled boots comfortable for walking.

Our feet and limbs are not as young as they were. A 12 mile walk is likely to entail 30-40,000 impacts between foot and path. Some found extra pairs of socks helped to cushion the feet.  At least one consulted a podiatrist about inserts to assist with foot, ankle, knee and hip problems and took  an anti-inflammatory (Ibuprofen) before each walk as a precaution against joint and arthritic pains .   Generally fitness and confidence in walking ability seemed to improve as the walks progressed.

It only rained once throughout the nine initial walks we did on the SDW.  We walked several stages more than once as team members had missed them the first time.  In all we walked sections of the SDW on 19 different occasions from September to January. We  experienced precipitation a total of three times in all though we walked during the wettest months of the year and through the wettest January since records began. The lesson here:  carry good waterproofs or be lucky.

Waterproof trousers and jackets are also windproof so we were often glad of them  on cold dry winter days.  Similarly hats and gloves were frequently necessary on colder days.

See also the point about the water-shedding overlap between waterproof trousers and boots in the section on footwear above. 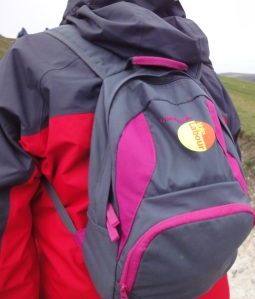 On most SDW sections there are no opportunities to buy food or drink mid-walk so most carried a small day sac for snacks and drinks, waterproofs, spare sweater and other comforts. Rucsacs vary in price widely. You don’t need anything special as long as it is comfortable for you when loaded.  Probably a bag of 10-18 litres is sufficient unless you are determined to carry all your worldly goods.  In cold weather small thermos flasks enabled us to have warm coffee breaks.  And everyone carried a plastic bag to sit on – there aren’t many benches along the way.

Several of us found these a boon.  Though nobody used two.  Some sections of the walk were a bit slippery and a pole provided stability.  A pole can also provide relief if feet or joints are tired or aching. Again, prices vary but they all function in much the same way. So does a nice hazel staff.

Most wore everyday casual clothing though some favoured sports trousers that were windproof, showerproof and quick-drying.  Jeans or other cotton trousers are not recommended as once wet they are slow to dry and conduct heat away from the body.

The ubiquitous fleeces are warm, light and allow perspiration to escape.  And base layers (also known as vests) can also be obtained that are said to wick away the moisture created by active bodies.  Those who wore ordinary cotton t-shirts survived though. You don’t need expedition grade equipment for what is a  series of pleasant country walks.

Fleeces also did not look in any way out of place in the tea lounge of the Hydro Hotel in Eastbourne where we celebrated the end of our walk.

Fleeces may not be windproof, however.  But even the lightest waterproofs  invariably are and so are important to carry even on dry days.

Several layers of clothes are good when it is cold and enable you to add and subtract to adjust body temperature when the going gets warm. Fleeces that zip into waterproofs seem like a neat idea.  But  you may want to wear the fleece without the waterproof or the water/windproof without the fleece.